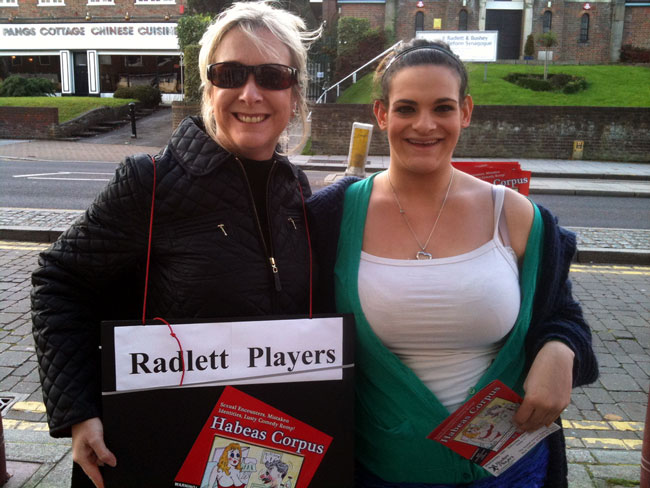 I ran into Paula Welham (left), secretary of the Radlett Players, and Georgia Dove, who plays Felicity Rumpers in the company’s latest production, outside Tesco in Radlett. They were handing out flyers for a version of one of Alan Bennett’s earlier plays called Habeas Corpus. By all accounts it’s a laugh riot. Wikipedia says:

It concerns the aging Dr. Arthur Wicksteed and his pursuit of a nubile patient, Felicity Rumpers. Wicksteed’s wife, Muriel, is, in turn, lusting after the charming head of the BMA, Sir Percy Shorter, who, as well as being Wicksteed’s old rival, turns out to be Felicity’s father – the result of an under-the-table liaison during an air-raid with Lady Rumpers, her mother.

Paula and Georgia were careful to point out that the production is not suitable for children and the flyer resembles a saucy seaside postcard from an earlier era.